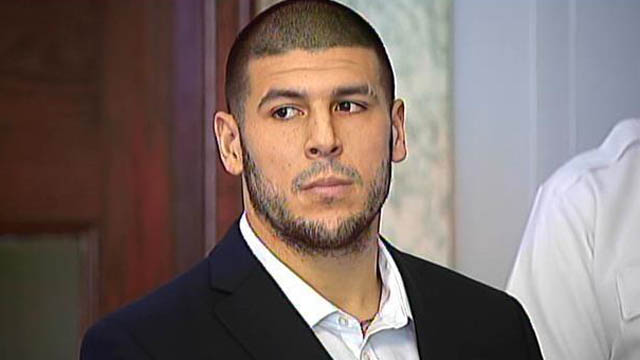 Aaron Hernandez: From Juvenile Delinquent to Sports Superstar to Criminal

A1 A1: On an APA title page, the title is on the first line, the author name (here Student Network Resources), the name of your university or school, the name of the course, the course section number, and finally the date. Often, professors have their own specifications for the title page, so you may want to consult with your teacher, professor, instructor, or teaching assistant to ensure you have the appropriate format. April 26, 2015

A2 A2: Headings are left-justified in regular font (can be bold, though APA does not require them to be in bold- check with your teacher for specific instructions). Introduction

For most people, the name Aaron Hernandez was synonymous with a sports superstar.  As a college player with the University of Florida, Hernandez was an All-American player and a member of the BCS National Championship Team.  He was drafted by the New England Patriots in 2010, where he became the youngest active player on any roster in the NFL.  He seemed destined for greatness, as one of only two tight end players on one of the leading teams in the NFL.  During the 2010 season, he was named Rookie of the Week by Pepsi; he played in the SuperBowl in his second season in the NFL; and by his third year with the NFL he received the highest signing bonus of NFL tight end in history A3 A3: Because these details are available in several different resources, nothing in this section is quoted or cited to a specific source. If the details were more specific or located in a single resource, it would be necessary to provide citation information when giving those details..  However, there was a darker side to Hernandez that had a severe impact on people’s lives.  He was known to be violent and had a history of petty criminal behavior related to that violence.  As early as 2007, Hernandez was involved in a bar fight that resulted in injuries to the employee who had escorted him from the building.  Later that same year, Hernandez may have been involved in a double-shooting in Gainesville, Florida.  In 2012, Hernandez may have been involved in the double murder of Daniel Jorge Correia de Abreu and Safiro Teixeira Furtado, though he has not yet been convicted of those murders.  In 2013, Hernandez faced a civil lawsuit in which a former friend, Alexander Bradley, accused Hernandez of shooting him after the two had a disagreement, though Bradley had refused to name Hernandez as his assailant when he first reported his injury.  Finally, in 2013, Hernandez became a suspect in the murder of Odin Lloyd.  He was eventually convicted of Lloyd’s murder; the first conviction in a string of violent crimes linked to Hernandez.

Even in his childhood, Hernandez seemed to struggle with two seemingly disparate personalities.  His father, Dennis, had been a local sports star in the area, but was also known for his involvement in a gang-type lifestyle.  While Dennis reportedly changed his ways when he became a father, he died when Hernandez was a young teenager, and his death reportedly sent Hernandez into a downward spiral.  Hernandez not only emulated his father’s sports star status, but also became involved with criminals and began using drugs. These lifestyle choices almost prevented him from attaining success as an athlete.  “Despite his obvious talents, NFL teams were wary of drafting Hernandez due to his admitted flunking of a drug test. Privately, many teams also worried about his association with gang types from his home neighborhood. He fell to the fourth round in the 2010 NFL draft before the New England Patriots selected him with the 113th overall pick” (Bio, 2015) A4 A4: This is a direct quotation, so it is included in quotation marks. There is no author, so the citation includes the name of the website, followed by the year of publication..

Once drafted, Hernandez quickly proved his merit as a professional football player.  He had 45 catches in his rookie year, which was a team record for tight ends, helping the Patriots secure the AFC Championship.  In his second year, along with Rob Gronkowski, he led the Patriot offense with 24 touchdowns and 2,237 receiving yards, helping secure his team’s position in Super Bowl XLVI.  He was injured in his third year, but was still positioned to become a team leader, which was recognized by the Patriots with his sizable signing bonus (A&E, 2015) A5 A5: While the information in the prior sentences is not directly quoted, it does contain specific facts and figures derived from a single source. Therefore, the source is cited following the conclusion of that information..

Although he would not be indicted for murder until 2013, Hernandez’s legal problems began as early as 2007, while he was still a student at the University of Florida.  It was then that Hernandez was first prosecuted for a violent crime.  An underage Hernandez had refused to pay for two alcoholic beverages that he consumed at a restaurant. After a restaurant employee escorted him out of the building, Hernandez attacked the man, punching him on the side of the head and rupturing his eardrum.  However, Hernandez’s youth seemed to work in his favor; rather than facing felony battery charges he was not convicted of a crime due to a deferred prosecution agreement (Solotaroff & Borges, 2013).

This brush with the law was not enough to make Hernandez change his ways.  Later that same year, Hernandez was suspected of being involved in a more violent criminal episode. Three men were sitting in a car at a stoplight in Gainesville when a shooter shot into the car, injuring the driver and one of the passengers.  Although Hernandez was suspected of being the shooter, he was never charged with a crime.  His 2015 murder convicted has led to further investigation of that homicide.

For several years, Hernandez seemed to limit his criminal involvement to petty crimes or, perhaps, to keep from getting caught when committing crimes.  He tested positive in a drug test, indicating illegal drug use, but there were no criminal charges linked to that drug test.  However, in 2012, Hernandez seemed to ramp up his violent criminal behavior.  Two victims were killed by gunshots as they sat in their car, an attack very similar to the earlier Gainesville assault.  Hernandez was suspected in their murders, but was not charged with those crimes at the time that they occurred.  In May of 2014, almost two years after the deaths of those victims, Hernandez was indicated for their murder.

If Hernandez had ever faced real consequences for his earlier crimes, then his last known victim, Odin Lloyd, might still be alive.  Unlike prior victims, who appeared to be strangers to Hernandez at the time he assaulted them, Lloyd and Hernandez were friends.  The men were dating a pair of sisters, and they hung out socially.  Lloyd, who as a semi-pro football player, was happy to associate with a well-known high-profile NFL player.  However, this association eventually led to his death.

One night while they were partying, Lloyd’s cousin approached him and tried to warn him that Hernandez was dangerous.  Lloyd defended Hernandez to his cousin, but the incident still led to a dispute between Lloyd and Hernandez.  While their argument became heated, it did not become violent, and Lloyd seemed to think that Hernandez had cooled down about the disagreement.  However, rather than becoming less upset, Hernandez’s paranoia, which some attributed to him using angel dust, led him to become increasingly upset with Lloyd.  His home security system has footage of him screaming about being unable to trust anyone (Solotaroff & Borges, 2013).  These feelings apparently led him to contact two of his friends from Bristol, Ernest Wallace and Carlos Ortiz, and tell them to come to Boston, where he used them to help attack Lloyd.

Lloyd got into the car with Hernandez, Wallace, and Ortiz, believing that they were headed out for another night of partying.  However, he quickly became aware of Hernandez’s dangerous mood and began texting his sister to let her know that he was in danger.  The three men attacked Lloyd in an industrial park in North Attleborough, approximately one mile from Hernandez’s home, where they shot him several times.

The crime was clearly not one of passion, but was, instead, premeditated.  Not only did Hernandez have accomplices comes help him, but he also rented a car for the evening in an effort to avoid detection.  However, “. Tracing the car back to the rental agency, police would eventually recover a .45 shell case and a wad of cotton-candy Bubblicious. And though Hernandez would monkey with his home-security system, getting rid of six hours of key recordings, and smash up the cellphone he’d turn in to cops, he’d neglect to scrub all the data they contained, handing police a honey pot of incriminating evidence” (Solotaroff & Borges, 2013).  Hernandez was arrested on June 26, 2013, the same day that the Patriots released him from their team.

Hernandez’s legal defense was an unusual one.  Rather than suggest that Hernandez was not present at Lloyd’s death, his legal strategy was to admit that he was present, but deny having taken part in the murder.  The jury did not find this defense convincing.  On April 15, 2015, Hernandez was found guilty of murder in the first degree, unlawful possession of a firearm, and unlawful possession of ammunition (Andersen, 2015).  He was sentenced to life without parole, the mandatory sentence for first degree murder in Massachusetts, and is currently incarcerated.

A6 A6: References are listed on a separate page, following the conclusion of the text. It is labeled References, which is centered at the top of the page References

2015 from The Boston Globe website: http://www.bostonglobe.com/metro/2015/04/09/guide-charges-against-aaron-hernandez/Hgwc2zpXJL7PU6r4A2 A2: Headings are left-justified in regular font (can be bold, though APA does not require them to be in bold- check with your teacher for specific instructions).i3NP/story.html

Looking for other documents related to Aaron Hernandez ? Search our collection of 122,000+ example essays, research papers, and term papers.
or search similar documents