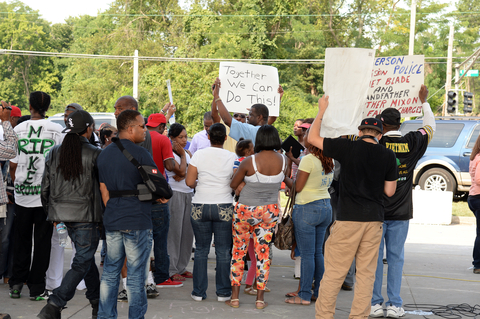 A1 A1: Headings are left-justified in regular font (can be bold, though APA does not require them to be in bold- check with your teacher for specific instructions). Introduction

On August 9, 2014, in Ferguson, Missouri young black male, Michael Brown, was shot repeatedly by a white police officer, Darrell Wilson and died as a result of the injuries.  Witnesses to the shooting disagree about whether Brown or Wilson was the primary aggressor; but all of the witnesses agree that, at some point during the altercation, Brown ran from Wilson and then turned back towards Wilson.   Although Wilson did not observe Brown breaking any laws that would authorize arrest, much less the use of deadly force, an additional complicating factor is that Brown may or may not have been involved in a strong-arm robbery, which involves the use of physical size to intimidate a robbery victim, just prior to the altercation.  Wilson, however, was unaware that Brown was a suspect in that robbery at the time of the shooting, though the dispatcher had indicated that a robbery occurred and where the suspect was located.

The witnesses agree that Wilson encountered Brown and his friend Dorian Johnson walking down the middle of the street and that Wilson told them to get out of the street, though they disagree about the type of language Wilson used.  Witnesses also agree that Wilson put his car into reverse and headed towards Wilson and Johnson, though there is disagreement about whether the vehicle almost struck Brown and Johnson.  At this point, witness accounts diverge dramatically.  Johnson describes Wilson striking them with the car door, the door bouncing off of them, and then Wilson grabbing Brown and then drawing his weapon and threatening to shoot him.  Sources close to Wilson describe Wilson trying to get out of his car and Wilson and Johnson slamming the door on him, before Brown punches him in the face and slams him back into the car, prior to making a grab for Wilson’s weapon A2 A2: Because this cites “sources close to,” a citation is provided so that the reader can refer to that source for additional information. A citation includes the author names and the year of publication in parentheses. (Clarke & Lett, 2014).  However, sources agree that Brown and Johnson run from the altercation.  Johnson hides, but Wilson pursues Brown.  Brown turns back towards Wilson.  Some witnesses say that Brown was clearly surrendering, while Wilson states that Brown was rushing him.  Wilson shoots Brown six times, killing him.

A3 A3: The heading is left-justified, regular font, and can be in bold or in regular script (APA says regular script, many professors prefer bold). Response to the Shooting

The police department response to the shooting sparked outrage among Ferguson’s black community, which was already under the impression that black people in the community received inferior treatment in comparison to white people.  The police department initially refused to release the name of the officer involved in the shooting and only seemed to release his name after an online activist group known as Anonymous released the name of another officer as the shooter.  The police department did not arrest Wilson for the shooting.  Furthermore, when people gathered to peacefully protest, the police responded with violence and intimidation, using pepper spray on peaceful protestors and arresting members of the press.

The police were not the only ones to react inappropriately; in addition to peaceful protestors, rioters flocked to the scene, destroying many local businesses.  These skirmishes between peaceful protestors and the police and between police and rioters escalated to a point where police where using military-style weapons on crowds of people in Ferguson.  The conflict continued for weeks, with no apparent resolution, though it eventually dwindled.

What made the Ferguson situation very interesting was that social media brought events to people as they were unfolding.  Witnesses who saw the police shooting tweeted about it or posted information about the shooting on Facebook, so that the police department and large media could not control the message about the shooting.  Protestors tweeted photos of police officers using pepper spray on individuals.  Police officers also falsely indicated to protestors that they were prohibited from filming the officers. Furthermore, people in Ferguson were able to capture images showing the use of military-level force on the people in Ferguson, sending real-time images of what was occurring, which sparked outrage, not just in the United States, but also on a global scale.  The world responded by sending members of the press to Ferguson to document what was occurring.

However, social media was also responsible for helping generate support for Officer Wilson and for bringing in hate groups to Ferguson.  Many people flocked to Ferguson to support Wilson and stated an intention to harm protestors.  People shared images of Brown pointing a gun in a photo, as well as footage of a man matching Wilson’s description engaging in a strong arm robbery prior to the altercation, in addition to images of Wilson’s alleged injuries, which were debunked.  The activist group Anonymous played a role in the social media outburst, using its resources to publish the presence of members of KKK in Ferguson, including the fact that many people in power positions in the area were also members of the KKK.

Violations of Freedom of the Press

What made the situation in Ferguson even more disturbing was the fact that police officers were actively targeting members of the press, which gave credence to claims that they were involved in a cover-up.  “On Aug. 13, 2014, police in Ferguson, Missouri, assaulted and arrested two journalists for allegedly failing to exit a McDonald’s quickly enough while on a break  from covering the protests” (Sandvik, 2014). These were only the first of many arrests targeted against journalists, who reported being harassed and assaulted while trying to cover the events in Ferguson as they unfolded, including being hit with tear gas and with rubber bullets.  Regardless of whether Wilson’s shooting of Brown was or was not justified, the treatment of the press alarmed many and seemed to reaffirm concerns that Ferguson was a miniature police state.

Prosecutor Bob McCullough presented evidence to the grand jury, which chose not to indict Wilson for the events leading to Brown’s death.  This decision resulted in renewed protests and renewed rioting.  However, concerns about how McCullough handled the presentation to the grand jury bring up real concerns about racial disparity and the possibility for justice in Ferguson.  McCullough was part of a group that raised money for Wilson’s defense, obliterating any idea that he was unbiased and creating a conflict of interest that should have prompted him to recuse himself from the case and ask for the appointment of a special prosecutor.

What is really interesting is how McCullough presented evidence to the grand jury.  A prosecutor’s role in front of a grand jury is different than his role at trial.  Instead of building a case to support a theory of a crime, the prosecutor is supposed to present evidence to the grand jury for the grand jury to determine probable cause.  However, in front of the grand jury, the prosecutor treated witnesses describing Wilson’s shooting of Brown as unprovoked as hostile witnesses, something that, as prosecution witnesses, he would not even have been permitted to do at trial (McCarter, 2014).  Given the evidence that McCullough chose to present to the grand jury and the manner in which it was presented, the failure to indict Wilson was not a surprise to most observers.  However, it did spark another round of protests and another round of rioting.

The grand jury’s failure to indict Wilson does not mean that Wilson cannot be prosecuted for his killing of Brown.  The Department of Justice (DOJ), headed by United States Attorney General Eric Holder, is charged with the responsibility of investigating police departments that engage in misconduct, with a particular emphasis on police departments that engage in active discrimination.  The DOJ has the ability to look at training, arrest record, and use of force to determine if the police department in Ferguson, which is overwhelmingly white, has engaged in biased behavior towards blacks.

However, the DOJ also has the ability to prosecute Wilson.  18 U.S.C.S. § 242 allows the federal government to bring charges against a police officer who has violated a citizen’s civil rights.  Whether or not the DOJ brings charges is based on whether or not Wilson’s actions stemmed from a civil rights denial.  For many, the definitive question in the case is whether Wilson had any right to use force against Brown.  Brown and Johnson were violating the law by walking down the middle of the street, but no one suggests that Wilson started shooting at Brown simply for walking down the street.  However, many witnesses do suggest that Wilson began his assault against Brown at that time, by driving a police car at him and hitting him with the door to the squad car.  This would certainly constitute excessive force for a minor crime like jaywalking and might be enough to substantiate a claim that Brown’s civil rights were violated.  After all, if Wilson had no right to approach Brown, then he is the instigator of a violent incident, and Brown may have been justified in using self-defense.  Even more interesting is that, even if Brown was an initial aggressor, if he ran from Wilson and then attempted to surrender, Wilson’s use of force would have been inappropriate.  However, whether the DOJ could establish that Wilson’s actions were an intentional effort to violate Brown’s civil rights instead of a panicked response by an inadequately trained officer seems highly questionable.

A4 A4: References are listed on a separate page, following the conclusion of the text. It is labeled References, which is centered at the top of the page. References

Clarke, R. & Lett, C.  (2014, November 11).  A5 A5: All references in APA format with a known author begin in the same way: Last Name, First Initial. If the reference was not written by an individual, then the corporate name comes first. What happened when Michael Brown met Officer

Darren Wilson?  A6 A6: The title of the article is place in italics. The first word is capitalized; the rest is in lower case, unless it contains proper nouns. Retrieved November 28, 2014 from CNN website: http://www.cnn.com/interactive/2014/08/us/ferguson-brown-timeline/

Sandvick, R.  (2014, November 26).  Documenting the arrests of journalists in Ferguson.

Retrieved November 28, 2014 from Freedom of the Press Foundation website: https://freedom.press/blog/2014/08/documenting-arrests-journalists-ferguson

Download Full Essay
A1: Headings are left-justified in regular font (can be bold, though APA does not require them to be in bold- check with your teacher for specific instructions).
A2: Because this cites “sources close to,” a citation is provided so that the reader can refer to that source for additional information. A citation includes the author names and the year of publication in parentheses.
A3: The heading is left-justified, regular font, and can be in bold or in regular script (APA says regular script, many professors prefer bold).
A4: References are listed on a separate page, following the conclusion of the text. It is labeled References, which is centered at the top of the page.
A5: All references in APA format with a known author begin in the same way: Last Name, First Initial. If the reference was not written by an individual, then the corporate name comes first.
A6: The title of the article is place in italics. The first word is capitalized; the rest is in lower case, unless it contains proper nouns.