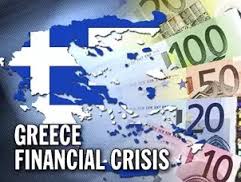 In 2008, the collapse of Wall Street had a ripple effect on the rest of the world, especially markets that were interconnected with the United States’ financial markets, which included much of Western Europe.  Greek was hit hard by the collapse of Wall Street and other global financial markets, but its real problems came in October of 2009, when Greece was forced to admit that its deficit was much larger than it had previously reported.  The combination of new information and what appeared to be Greece’s attempts to hide its deteriorating financial conditions made people extremely concerned about Greek’s financial situation and prompted a swift response from the global financial community.  The first thing that happened was that Greek was prevented from borrowing in the financial markets; unfortunately, without the ability to borrow Greek faced potential bankruptcy.  The looming threat of bankruptcy led to another response.  The International Monetary Fund (IMF), the European Central Bank, and the European Commission gave Greece the first of two bailouts.  While the bailouts kept Greece from bankruptcy, at that time, they came with conditions known as austerity cuts.  These conditions required the Greek government to dramatically cut spending and increase its taxes, including making it far more difficult for the people of Greece to evade taxes.

The bailouts were not meant as a permanent fix for Greece’s financial troubles, but, instead, were intended to help allay fears that the European Union (EU) was in danger of dissolving and give Greece time to stabilize.  The bailouts did help Greece’s economy stabilize somewhat, but the austerity measures were deemed to be excessively harsh by the Greek people.  Moreover, the financial conditions within the country saw little improvement after the bailout.  Unemployment was above 25 percent and the economy continued to shrink after the bailouts.  In order to understand how that could happen with two multi-billion dollar bailouts, it is critical to understand the purpose of the bailouts; they were not intended to provide an internal boost for the Greek economy, but, instead, to give the Greek government a way repay debts it already owed to other countries.  Because very little of the bailout money went into the Greek economy, there was essentially no way for the economy to recover.  Unfortunately, without a recovery, the economy continued to decline, which meant that the government continued to struggle under a cumbersome debt burden.

In fact, while the bailouts may have helped Greece pay some of its international loans, the austerity measures that were linked to the bailouts probably helped exacerbate Greece’s financial problems.  People who were already struggling were faced with a higher tax burden, but also with a government that reduced employment and the available aid for those who were unemployed, creating a desperate financial situation for many Greek citizens.  These conditions had a tremendous impact on Greece’s domestic political scene, with the most recent candidates finding success because of a platform that promised to challenge the terms of the bailout.

While Greece may have been determined to challenge the terms of the bailout, their creditors did not agree with their premise that the bailout’s terms were unfair.  In fact, Germany, was adamant about the austerity conditions and thought it would be unfair to other countries who had faced similar conditions to change the terms for Greece.  Germany’s opinion on the matter was particularly critical because it was Greece’s largest individual creditor and was one of the few countries whose economy had weathered the global financial crisis without major upheaval.  Furthermore, Germany, like Greece, is a member of the EU, giving it significant clout in the decision-making process.

Furthermore, while Greece had a staggering 320 billion Euros in debt, the structure of that debt was critically important, as well.  Almost 200 billion of the debt was either directly linked to the two financial bailouts that Greece received or was owed to a country in the EU, and Greece was not required to make immediate payments on much of that debt.  In fact, the IMF had even considered extending the time until Greece’s first payment for an additional quarter-century beyond the terms of the bailout, giving the country’s battered economy additional time to recover.  Therefore, the country’s entire debt load may not have been as burdensome as many assumed.  However, Greece still faced short-term solvency problems and was struggling to pay two of its larger creditors, the IMF and the European Central Bank.  Though the debt to those two creditors was less than ten percent of Greece’s total debt, the fact that Greece was having problems paying them, combined with the total debt, increased global concerns about Greece’s economy, which, in turn, negatively impacted their economy.

One alternative that Greece considered was leaving the EU, which would either be prefaced by it defaulting on its debt or would be followed by it defaulting on its debt.  Many people worried that such a default would trigger another global financial crises, not only because of Greek defaulting, but because Greek was only one of several struggling member countries.  Greece’s economic struggles were similar to struggles in Italy, Portugal, Ireland, and Cyprus.  Moreover, while Germany may have had considerable clout in the discussions about Greece’s debt, it was not the only country whose economy had recovered by the 2008 global financial crisis: Spain, France, and Britain were all performing so well that, taken as a whole, the EU’s financial outlook was positive.  Therefore, some people argued that Greece’s departure from the EU would not carry dire negative repercussions.  Greece had never played a major role in the EU’s economy and had always been dependent on other nations for financial help and support.  If it departed from the EU, the short-term financial losses might actually have been offset by a long-term positive gain in the EU’s financial outlook.

In order to truly understand the potential impact, one first has to really understand how decision-making works in the EU.  The EU may be one body, but it is composed of 28 member nations and each of those nations, in addition to its obligations to the EU as a member nation, also has obligations to its own citizens and taxpayers.  While the European Central Bank serves as something like a financial oversight committee for these different nations, each nation retains its own autonomy over its financial decision-making process, despite the fact that such decisions impact the overall value of the Euro, and, therefore, impact the economies of all of the member nations.

The entire Euro system is somewhat confusing, and, critics believe it is doomed to failure because of the autonomy retained by member nations.  They even question whether there was a need to move to a single currency.  However, while there may be problems in the financial processes related to the Euro, the reality is that, overall, the move from local currencies to the Euro system has proven to be beneficial, overall, to Europe, and has helped encourage trade and travel between those countries, which was the goal.  The primary failure has been that there were insufficient supporting political changes that would have given the EU some more significant legal powers over its members, making it more of a federal-type structure.

Furthermore, when the EU was planned, there was a glaring omission in its organizing structure; there were no conditions for withdrawal.  How Greece would withdraw from the EU, and the responses permitted, allowed, or encouraged by other member nations is not clear.  Moreover, how that would impact the relationships between those countries and Greece as it moves forward is also unclear.  This is partially due to the fact that the people of Greece seem mixed in their own desires.  Anti-austerity candidates found some support, but did not sweep elections like they believed that they would, suggesting that even though the citizens are hurting under the austerity measures they are cautious about fully supporting candidates that might endanger the potential for further bailout payments because ending that might be even more devastating to the economy.

At this point in time, it does not appear that Greece will be withdrawing from the European Union in the near future.  Greece and its European creditors entered in an agreement that would keep Greece in the EU.  This agreement has some of the weaknesses associated with the bailout.  First, it imposes new austerity measures on Greece.  However, the current austerity measures have already proven incredibly damaging to the most vulnerable members of Greek society, and the agreement negotiated in mid-July would only increase those measures.  As with any financial crises, the poor and the middle-class would be disproportionately impacted by those measures, making it unclear whether the people of Greece will peacefully accept the terms of this newest bailout agreement.

The Greek citizenry are not the only ones skeptical of the deal.  While the European creditors may have all of the power in the negotiations, the IMF has some influence and threatened to withdraw support for Greece’s bailout if the bailout failed to include substantial debt relief.  At the IMF, there appears to be some recognition of the idea that Greece’s internal economy has no way of recovering while faced with the current austerity measures, so that continued bailouts, which increase Greece’s debt load to its creditor countries, are only going to result in increasing financial hardship.  While Greece and its creditors may have reached an agreement that prevented Greece from withdrawing from the EU right now, it seems naïve to suggest that the proposed agreement will have the desired long-term positive impact on Greece’s debt that proponents suggest it will have, and, instead, seems clear that it might actually prove incredibly detrimental to A1 A1: There are no references included in this paper, because, while sources were consulted, none of the information in the paper is of the specific nature that requires citation to a source. Greece.

Download Full Essay
A1: There are no references included in this paper, because, while sources were consulted, none of the information in the paper is of the specific nature that requires citation to a source.