Ongoing Conflict between Israel and Palestine 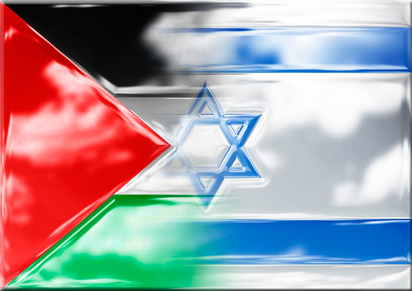 A2 A2: The title is centered in roughly the middle of the page. The subtitle is contained on a second line. The Ongoing Conflict between Israel and Palestine:

A2 A2: The title is centered in roughly the middle of the page. The subtitle is contained on a second line. Why Peace in the Middle East is Elusive

A3 A3: Standard APA format requires the author’s name on the title page, immediately following the title. Bob Smith

A5 A5: A first level heading describes the purpose of that section of the paper. An introduction introduces the reader to the subject matter of the paper. First level headings are written in bold text and are centered in the paper. The land of Palestine has long been considered a holy land by the world’s three Abrahamic religions: Judaism, Christianity, and Islam.  As a result, the history of Palestine is filled with religious and culturally-fueled conflicts between groups that want to claim control over the region.  From the Crusades through modern day conflict, religious and cultural differences have helped fuel the political disputes between different groups of people in the region.  From a religious basis, this can largely be traced to the split between Judaism and Islam.  For Jews, the religious relationship with God is traced back to Abraham through his son Isaac.  Muslims trace their relationship to God though his son Ishmael.  The two brothers had a historically contentious relationship, largely due to the fact that they had different mothers.  Simplistic explanations of the modern conflict suggest it can all be traced back to this primary conflict.  However, while this conflict may help explain some of the racial animosity between the two groups, it does little to explain the political scenario that has led to the modern Israeli/Palestinian conflict.

A6 A6: Another level one heading, this is capitalized, centered, and placed in bold. It is only separated by a normal space between the preceding paragraph and the text that follows it. Palestine Prior to World War I

For approximately 400 years prior to World War I, including the the time period immediately preceding World War I, the area historically known as Palestine was under the control of the Ottoman Empire.  During that time period, Palestine was inhabited primarily by Muslims of Arabic descent, although it also contained Christian Arabs, Druze, Circassians, and a substantial Sephardic Jewish population.  It was period of relative peace, although the end of the Ottoman Empire was marked by both pro-Arab and Zionist movements, which helped put the rightful occupation of the Holy Land in conflict.

A7 A7: Another level one heading, this is capitalized, centered, and placed in bold. It is only separated by a normal space between the preceding paragraph and the text that follows it The Fall of the Ottoman Empire

The Ottoman Empire had entered into a mutual defense treaty with Germany at the beginning of World War I.  However, Palestine had sought freedom from Ottoman control and both the Jewish and Arab populations of Palestine supported the Allies in World War I in an effort to gain that freedom.  The British Empire gained control of Jordan, Israel, Iraq, and Palestine.  In 1917, the Balfour Declaration supported the establishment of the Jewish state of Israel, but did not establish that state (Rosenberg, 2014).  In 1919, the Paris Peace Conference, the Faisal-Weizmann Agreement, and the Treaty of Versailles all seemed to support the establishment of Israel as a Jewish state, but did little to protect Arabs in Palestine.

A8 A8: Another level one heading, this is capitalized, centered, and placed in bold. It is only separated by a normal space between the preceding paragraph and the text that follows it. Zionism and the Creation of Israel

The Zionist movement began in the late 19th Century.  Prior to this time period, through various diaspora, the worldwide Jewish population had become concentrated outside of the historic Holy Land, so that most Jews lived in Europe, the Americas, and elsewhere in the Middle East rather than Palestine.  Zionists urged the creation of Jewish homeland in Palestine.  Many people believed that Zionism was a reaction to the Holocaust, but, in reality, Zionism predates either of the two world wars.   In fact, the first Zionist Congress was held in Basel, Switzerland in 1897 (A9 A9: In-text citations in APA format follow the (author, date) convention. Because there is no named author, the foundation substitutes as author. American-Israeli Cooperative Enterprise, 2014).  However, this Zionist push was driven by anti-Semitism abroad.  The World Zionist Organization and the Jewish National Fund began to purchase land in Palestine in order to further the goal of returning Jews to Israel.  Although early Zionist efforts did not lead to the creation of a separate Jewish state, they did help highlight tensions between Arab Palestinians and Jewish immigrants, and violence between self-identified Israelites and Palestinians began in the late 1800s.

Palestine in Prior to and During World War II

Prior to World War II, Jewish immigration to Palestine increased in significant numbers, changing the demographics of what is now known as Israel.  Britain established an autonomous Arab state, which eventually led to independence for Jordan.  Palestinians and Jews began to fight over the Jewish settlement in the region.  Growing anti-Semitism in Europe helped fuel this immigration, and many of the immigrants settled on lands that had traditionally belonged to Palestinian Arabs.  The rise of the Nazis in Germany and throughout much of Europe contributed both to Jewish immigration to Palestine and also to Zionist desires to have a Jewish homeland.  However, Palestinian Arabs felt threatened by this increase in immigration, and from the 1920s forward, hostilities between the two groups began to increase. The Jaffa riots marked the first organized major riots by Arab Palestinians against Jewish population, and, in response, the Jews established the Haganah as a defense force.

In the 1930s, the Peel Commission first proposed a two-state solution, which would establish the Jewish State of Israel and an Arab state of Palestine.  This solution was rejected by the Arab leadership in Palestine.  Britain responded by suggesting a one-state solution.  Under that proposal, Jewish immigration to Palestine would be limited and Jews would have limited rights to purchase property from Arabs.  These regulations remained in effect during most of World War II, which limited legal Jewish immigration to Palestine, although there were a significant number of illegal immigrants to the area, as European Jews fled the spread of the Nazi Empire.  Further complicating things was a relationship between Arab leaders in Palestine and Nazi Germany.  Palestine became a member of the Axis powers and actually engaged in a holy war against Britain.  The Jewish resistance established the Jewish Resistance Movement, which engaged in terrorist-style attacks against the British government and helped promote illegal immigration of Jews to Palestine.

After World War II, the United Nations met to discuss the issue of Palestine.  It embraced a two state solution, which would separate Palestine into an independent Arab State, and independent Jewish State, and the City of Jerusalem, which, along with Bethlehem, was to be placed under the control of the United Nations.  Neither the Jews nor the Arabs liked the proposed plan, but it was eventually adopted, with some amendments, by the United Nations, despite opposition by every major Arab leader of the time.  This result was followed by a series of wars: 1947-1948 was marked by war as Britain evacuated the area, but ended with the establishment of Israel.  1948-1949 marked a war between Israel and the surrounding Arab states of Jordan, Syria, Egypt, Iraq, and Lebanon.  Arab leaders evacuated some areas, but there was a much larger evacuation by Arab Palestinians than was needed for the war, with approximately 700,000 Palestinians becoming displaced during the conflict.  In 1950, the Six Day War between Egypt and Israel resulted in Israel seizing territory that had been held by Egypt, including the Gaza Strip, an area that remains highly contested.  While there were no official wars for decades following the Six Day War, Israel and Palestine remained locked in constant strife, which resulted in the creation of the Palestinian Liberation Organization (PLO), a group that used terrorist tactics to try to return Palestine to Arab control.  In 1973, Syria and Egypt attacked Israel in the Yom Kippur War, but were not successful in their attempts to control Palestine.  The PLO began to engage in diplomatic negotiations with Israel, which were brokered by the United States in the Camp David Accords and later as part of the Oslo Peace Process.  PLO leader Yassar Arafat officially renounced terrorism as a tactic and recognized Israel’s right to exist.  In return, Israel agreed to the establishment of the Palestinian Authority to govern the Gaza Strip and the West Bank.  However, an autonomous Palestinian State never developed, and, beginning in 2000, the Second Intifada marked an increase in violence between Palestinians and Israel

While Hamas is perceived by many outside of Palestine as a terrorist organization, it is critical to understand the role that it played within Palestine to understand Palestinian support for the organization.  Hamas began by establishing critical social services for Palestinians that Arafat and the PLO and later the Palestinian National Authority failed to establish.  However, Hamas also adamantly opposed recognition of Israel’s right to exist.  Hamas became the leading political party in the Palestinian Legislative Council, which led to economic sanctions by much of the West.  Israel also refused to negotiate with Hamas.  Unlike the PLO, Hamas has refused to renounce terrorism.  However, what many people do not realize is that Hamas is more like a political party; it does not represent all of Palestine, nor are the majority of Palestinians terrorists.

Israeli Settlements in the West Bank

Further exacerbating tensions is the fact that Israel has not stuck to a plan that gives Palestinian control to the West Bank.  Instead, Israel has continued to settle Jewish Israelites in the West Bank.  The United States has opposed those settlements and Israeli leader Benjamin Netanyahu has indicated a willingness to stop targeted settlement in the West Bank and explore a two-state solution.  However, his conditions, including prohibiting Palestine from having an army, have been viewed as too onerous.  Hamas has continued to condone and support terrorist actions against Israel and Israel has responded with violence against Palestinians, regardless of their affiliation with Hamas.

At the present time, there does not appear to be a solution to the violence between Israel and Palestine.  As the history reveals, both sides have, at times, fueled the violence and discord between them.  Neither side seems willing to engage in sufficient compromise in order to end the violence.  Hamas’ position that Israel is illegitimate is clearly threatening to Israel, while Israel’s refusal to allow displaced Palestinians to reoccupy their lands or to agree to halt Jewish settlement in Palestinian territories is threatening to Palestine.  While a two-state solution may seem the obvious choice for peace, the reality is that it is unlikely that the two sides will be able to agree on important conditions like the boundaries, rights, and responsibilities of those states.

B1 B1: In APA format the works cited is referred to as references. The word “references” is centered, but not italicized, underlined, or placed in bold. References

B2 B2: Because there is no individual author, the foundation is listed as author. This citation comes first because the references are alphabetical. Rosenberg, J.  (2014).  Balfour Declaration.  Retrieved July 28, 2014 from About.com website: http://history1900s.about.com/cs/holocaust/p/balfourdeclare.htm

Looking for other documents related to Ongoing Conflict between Israel and Palestine? Search our collection of 122,000+ example essays, research papers, and term papers.
or search similar documents